Patient Story: From Menopause at 35 to Three Kids 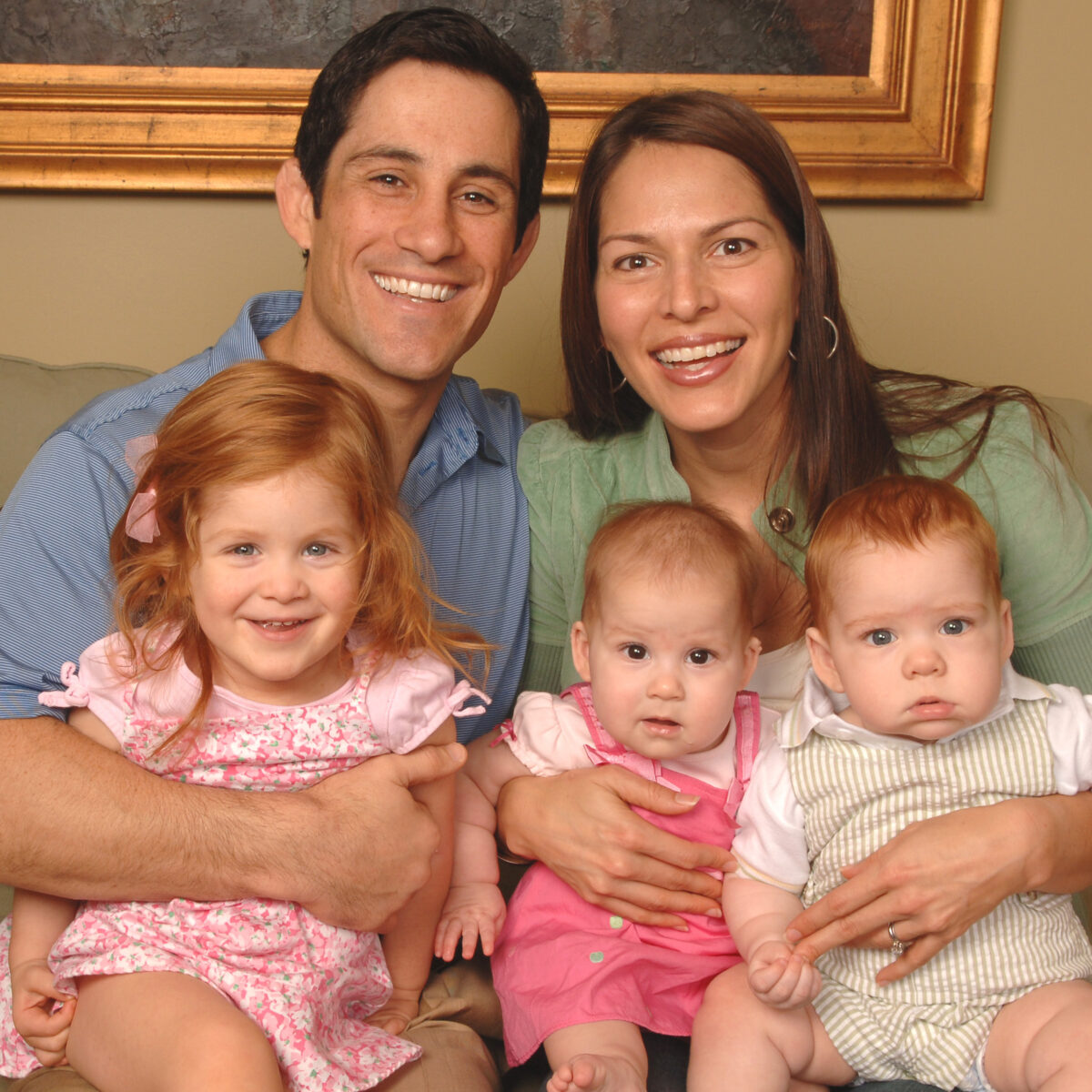 I’ve always been a healthy, positive person with big dreams. I knew some day I would meet that special someone and start a family.

From an early age, I always knew I wanted children. I come from a long line of fertility. My grandmother gave birth to 15 children, my mother 4, and my brothers and sister have 7 more kids among them, who I love dearly and who are a big part of my life. My love of children even drew me to my occupation as an early learning Spanish teacher working with the cutest little students ages three to eight.

When I was 26, a misdiagnosed appendicitis left me hospitalized for a week with an infection. I recovered from the ruptured appendix, but 15 months later I was hospitalized again and had another major abdominal surgery. It almost took my life and left me trying to figure out if I would ever have children. I lost my right ovary, fallopian tube, and parts of my intestine to surgery. My remaining left tube was damaged. The medical diagnosis was that it was blocked and filled with fluid, a hydrosalpinx.

The doctors said that I had so much infection and disease that my ovary and tube weren’t even recognizable. It was mush. They said I was going to have a lot of scar tissue and adhesions, leaving my insides “like concrete.”

I was confused and afraid and while I was thankful to be alive, I had to ask the doctors a simple question . . . “Will I ever be able to have kids?” His answer was, “Not naturally. It would have to be through IVF. You’re young and healthy and you have your left ovary.”

Now flash forward, I’ve met the man of my dreams, we’re in a financial position to afford IVF and excited to start our family. Everyone advised me to get started with IVF early, since there can always be complications and it takes longer than you think. My biological clock was ticking and I wanted to have several shots at this before I turned 35.

While IVF wasn’t exactly what I had planned when I dreamed of getting pregnant, with all the shots, hormones, and invasive procedures, I was thankful for all the progress in the field because for me, it was the only way for me to get pregnant.

At our first consultation the doctor told me I would be a good candidate as long as I had high quality eggs. She also recommended that before we do IVF, we should remove my remaining unhealthy tube because it had a hydrosalpinx — it was blocked with fluid that could be toxic to the embryo. I thought sure, whatever it takes because this is my only chance and every single doctor I asked said the same thing — that there was no way to repair my damaged tube. So according to all medical sources I checked, IVF would be my only chance, and I had to remove my only tube, which was beyond repair.

First I had to do blood work, and then we could get on with it. Another devastating blow came when our nurse called and said my hormone levels of FSH (which helps the egg mature) was abnormal. The normal and acceptable range is between 2 to 10. Mine was 26.2, indicating that my body wasn’t producing quality eggs. In fact, I was officially diagnosed as menopausal. I was newly married and ready to start a family and our doctor was telling my husband and me that if we wanted to have children we would need a donor egg, or to adopt.

We were crushed. I took the news hard. This wasn’t supposed to be happening to me. I was young and felt healthy other than the fact that I was “infertile.” I felt so bad; it was my fault we couldn’t have kids. I was mad at the doctors who first misdiagnosed my appendicitis, and I was heartbroken as I watched many friends and family around me get pregnant so easily. “So now what?” I asked myself.

I was open to new possibilities and I wasn’t ready to give up on my hope of conceiving naturally, so I did a lot of research and I found Clear Passage. While I had my doubts, it seemed like the best fit for me since they said they had shown success opening blocked fallopian tubes. The therapy didn’t involve surgery; it seemed therapeutic and nurturing and that made sense to me. I was following through on my instinct to find some alternative to surgery. Basically, I was following my heart.

With the love and support of my husband, we made plans to drive six hours to their clinic in Florida. We felt we had nothing to lose and we looked forward to the trip as a chance to get away for the week where we could be together, and I could concentrate on healing my body.

I had so much to be thankful for — a loving husband, a supportive family, a great job, and wonderful friends. I wrote in my journal, “I feel empowered because I am doing everything possible to better my chances. If it doesn’t happen, I will know I tried. I’m a believer. I’m also feeling a little vulnerable because tomorrow starts the beginning of a new journey. Whether pregnancy is a result or not, I know Eddie and I will be able to deal with it.”

Once I got there, any doubts I had disappeared. I felt good about the staff, their ability, and their professionalism and care. I knew I was being treated by experienced professionals who actually listened to me and what I had to say about my body. I received 20 hours of therapy. Eddie and I left there believing it worked, but the moment of truth would come a month later when I did the HSG dye test, to see if my tube had opened.

The day it was scheduled was an emotional day for me. I was nervous and anxious. Just a few years ago when I had the same test done, I fell apart in my mother’s arms watching the dye collect in my tube, marking the beginning of infertility. Now I was holding my husband’s hand watching the dye spill out of my tube — which was now open! We hugged and cried and immediately went home to try to get pregnant, the old-fashioned way!

We got pregnant naturally the next month with our first redheaded miracle, Maria Rose. When Maria was seven months old we drove down to Clear Passage again to thank everyone and have everyone meet Maria. I also received four more hours of therapy to address some pain issues from the vaginal delivery I had at Maria’s birth. I have to say that once again, the positive changes from just those few hours were extraordinary! Five months later I found out we were pregnant again naturally, this time with twins! I gave birth to two healthy babies, Edward and Katherine, in May, 2006. We now have three beautiful redheads completing this miraculous journey.