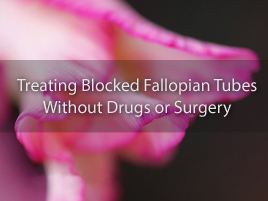 Authors of the study “Treating Fallopian Tube Occlusion with a Manual Pelvic Physical Therapy,” became curious after a pilot study published in Fertility and Sterility (9/06) showed the treatment returned fertility in women with blocked and swollen tubes.

The non-invasive treatment developed by Clear Passage Therapies® (CPT) involves a unique protocol of manual physical therapy techniques that can be completed at any CPT clinic in one week.

According to the study, CPT’s non-surgical treatment opened tubes in 61% of women with totally blocked fallopian tubes. Without the treatment their chances for pregnancy would have been available only through surgery or in-vitro fertilization (IVF). Of the successful participants, 53% conceived naturally after the non-surgical treatment.

“I was amazed after therapy to learn my only tube was open, and I became pregnant naturally,” said Jennifer Kennedy, a CPT patient. Before therapy, one of her tubes had been removed during emergency surgery, and her remaining tube was totally blocked and swollen. “We wanted a family, but I wanted to avoid more surgery if possible, so I tried CPT. Since therapy, we have since been blessed with three beautiful children – naturally,” said Kennedy.

According to research gynecologist and former Chief of Staff of North Florida Regional Medical Center, Richard King, M.D., “This therapy has shown remarkable results in several areas and is a natural adjunct to gynecologic care.”

Larry Wurn, Clinical Research Director, founded CPT with his wife, Belinda, a physical therapist of 30 years. In 1987, Belinda developed chronic pain after surgery for pelvic cancer. The work they developed relieved her pain. When they used it on patients, women who were diagnosed infertile began having babies naturally.

A surprising side-effect of the work was increased orgasms. Many women reported improved sexual function including increased desire and orgasm, and less intercourse pain after receiving the therapy, according to two other published medical citations (Fertility & Sterility, Medscape General Medicine).

“These initial results are very encouraging,” said the Wurns. “Many physicians are impressed that a non-surgical therapy (Wurn Technique™) can be effective treating pain or infertility.”