What You Should Know About PCOS

Polycystic ovarian syndrome is a hormonal condition that affects approximately 10 percent of women of reproductive age. It is associated with a surplus of androgens, or male hormones, which can cause acne, excessive hair growth and muscle mass in females. Women with polycystic ovaries may experience a wide array of additional symptoms even if they don’t have the signature “string of pearls” pattern of ovarian cysts.

PCOS is the most common cause of female infertility, according to the Office of Women’s Health. However, less than 50% of affected women are diagnosed. In women affected, the ovary does not produce enough hormones for egg maturation. Lack of regular ovulation leads to an irregular menstrual cycle, hindering a woman’s chance at pregnancy.

Signs and symptoms of PCOS

The most common signs and symptoms include:

It is important to note that there is no single test for polycystic ovarian syndrome. Physicians must consider all of a woman’s signs and symptoms and rule out other possibilities to accurately diagnose the condition and determine the appropriate treatment plan.

What causes PCOS and who is at risk?

The cause is currently unknown. Some evidence suggests that it may be genetic. For that reason, women with a family history of polycystic ovary syndrome are considered more likely to have the condition. Another potential risk factor is a family history of diabetes, due to the suggested relationship between PCOS and the body’s ability to produce insulin.

Research suggests that lifestyle changes, such as diet, can help restore ovulation and increase pregnancy rates. The following resources provide an overview of what to incorporate and remove from your diet if you suffer from PCOS. 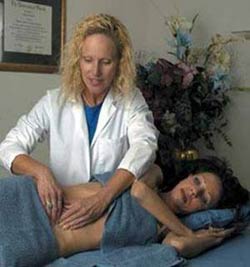 Exercise is equally important. In addition to promoting weight loss, becoming more active and exercising regularly has been shown to lower insulin levels in some women with polycystic ovaries.

While there is no known cure for polycystic ovarian syndrome, several treatment options are available:

In addition, there are two surgical treatments for ovarian cysts. Ovarian drilling, also known as ovarian diathermy, involves drilling tiny holes into the ovaries to reduce testosterone levels and stimulate ovulation. The second option is ovarian wedging, in which the surgeon removes part of the ovary. However, surgery is generally not recommended for women who are trying to become pregnant due to the risk of post-surgical adhesions and scarring, which can affect the function of reproductive organs.

Our therapists provide an alternative treatment, addressing the hormonal and mechanical aspects of PCOS-related infertility with surgery or medications.

We believe that our success treating women with PCOS can be attributed to our work at the major attachments of the dura. The dura is a fascial ‘sweater’ surrounding the spinal cord, from the bottom of the tailbone to attachments at the top of the neck and the base of the skull. From there, it enters the skull through a large opening (the foramen magnum), then spreads out to surround the brain and every structure in the head. Naturally, this includes the sphenoid bone, which houses the pituitary-hypothalamus complex. Strong sheaths of the dura totally surround and infuse with the pituitary gland, which plays a major role in reproduction.

Any adhesive restriction within the fascial system can create profound effects in various areas of the body and affect reproductive function. Thus, during the course of the 20-hour therapy program we treat the full body as we focus in on the dura and all of its attachments, from the tailbone into the head. We often find that previous surgeries or infections cause these adhesive restrictions.

Using a manual therapy protocol, our therapists have helped many women with PCOS avoid the need for surgery and medication, and helped them conceive. At 54%, Clear Passage pregnancy rates were about double the rates achieved by surgery (33%) or medications (22%). (Rice et al., 2015a) 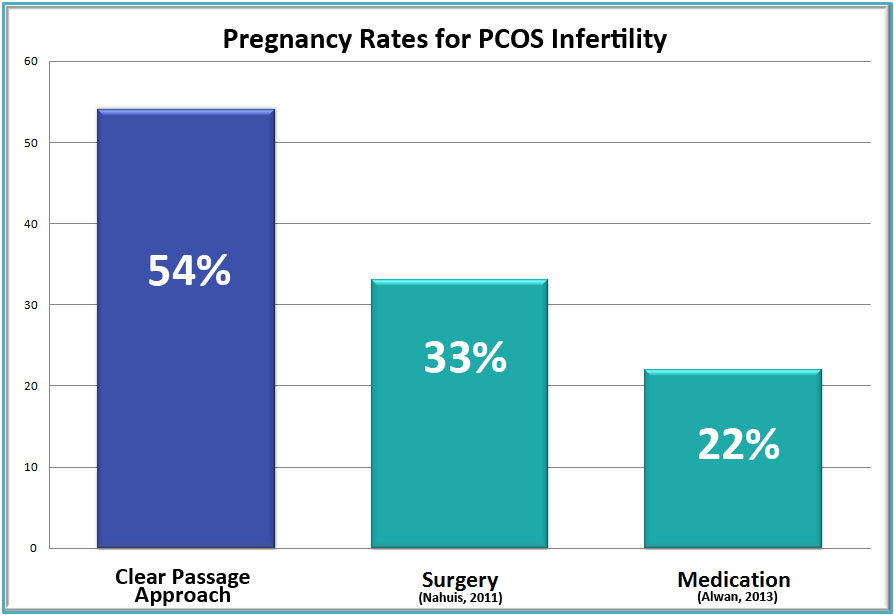 If you or someone you know is suffering from PCOS infertility, request a phone consultation with one of our therapists, at no cost to you, to learn if our treatment can help you.