What Is Bowel Obstruction? – A Patient’s Perspective

What is bowel obstruction? It is a potentially life-threatening condition often caused by abdominal adhesions. To better understand the implications of bowel obstruction and how our therapists treat this condition, we invite you to read the following first-person account from a former Clear Passage patient. You can find many other patient stories in our book, Overcome Infertility and Pain, Naturally.

I asked the gastroenterologist if I could return to the healthy state my body was in before the obstruction, and I was dismayed to hear him say that would be impossible.

As a woman in my fifties, I love to feel good, embrace life and live it to its maximum. My great-grandfather rode his bicycle every day until he died in his nineties, and I’d like to do the same.

I have been extremely healthy and athletic throughout most of my life; in fact, I was a gymnast and ballerina during school, and a physical fitness devotee afterwards. I had some fleeting abdominal problems in my forties, which were diagnosed as probably Candida or ulcer related, but I was still going strong. While visiting Italy three years ago, I began to experience serious complications with my health: I suddenly began to lose my breath and I lost consciousness. Later I discovered that my husband had first tried to wake me by pouring water over me. When that didn’t work, he desperately slapped me and shook me until I finally came back to my senses. When I fainted again four hours later, someone called an ambulance. Meanwhile, my husband frantically performed CPR and almost fractured a rib to revive me. That time, I was unconscious for almost four minutes.

I was hospitalized for tests for seven days, but all the tests came back negative or inconclusive. Suspecting a small bowel obstruction, the physicians would not allow me to eat solid food. My weight dropped to 98 pounds (I’m 5’2” and normally weigh about 110 or 112). When I was finally released, I wondered if the cause of this unexplainable event was air pollution since, during this time, I had heard that several people had suddenly lost consciousness throughout Italy. Still, I had an early history of bowel problems, and I remembered the hospital physician restricting my food intake, due to his concerns about my bowels. 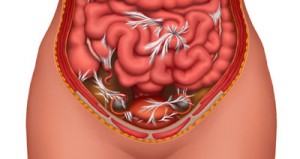 Three years later,  I began experiencing something that felt similar to a bowel obstruction, with pressure on my rectum. As the month neared its end, I started to feel unusually weak. Then once again, I fainted, and again my husband forcefully revived me (this time with my son). My memory took me back to my terrifying experience in Italy; then fear set in. Because of the recurrence, I knew it had to be something serious. I went to my doctor immediately, and requested a prescription for oxygen. In the past, oxygen enabled me to feel better when I knew I was close to fainting.

I could always tell when I was going to faint: I would get a terrible pain on my right side, by my colon, in the morning or evening. My legs and feet would become ice cold, I would feel extremely weak and have to lie down. Then my intestines would rumble and they would feel very weird, almost as if worms were slowly slithering through them. My abdomen would then distend and I would have to change into pants without a belt so that I could breathe better. Gradually, my breath would slowly slip away from me and my tongue would turn white. It wouldn’t feel as if I were being strangled; it would feel as if my breath were going away, never to return. It was the worst feeling imaginable. It felt like imminent death.

During these times, I was often unable to eliminate. I sought help by having a few colonics, visiting more doctors and completing more medical tests. After I fainted another time, I decided to go to a different hospital where I hoped they might provide us with some answers.

After four days, a colonoscopy, a barium swallow test to see if my small intestines were working properly, and many other of tests, I was informed that I was perfectly healthy. The doctor never told me that adhesions cannot actually be seen by diagnostic tests – only by surgery.

Having no further reason to hold me in the hospital, the doctors became some what verbally disrespectful and treated me as if I were a hypochondriac. For example, when I awoke in the middle of the night feeling the onset of the symptoms that generally preceded my unconsciousness, I asked the nurses for oxygen. After numerous pleas, they very reluctantly gave it to me, at last. The next morning, the doctor was furious with me for “hassling” his nursing staff. I was “being ridiculous and needed to leave,” he said to me. I think he truly believed I was just trying to fool them, for some reason. However, he allowed me to remain because it was the weekend, and I had the “right” to meet with the gastroenterologist to discuss my test on Monday.

In the meantime, my husband continued to research about small bowel obstructions online, and found valuable information. He learned there was a Catch-22 with bowel obstructions and surgery. Surgery could remove the obstruction, but it would often cause another one to form. We shared this information with the gastroenterologist, and he agreed. He suggested I change to a liquid diet and start taking a mild laxative daily. I asked him if I could return to the healthy state my body was in before the obstruction, and I was dismayed to hear him say that would be impossible. After all of these experiences, I was terrified to ingest anything but liquids, so I slowly became very weak. As my weight continued to decrease, I lived in fear of another fainting episode. I dreaded the night, scared to close my eyes. I didn’t want to sleep. I wanted to stay awake and be vigilant of all of my symptoms. I felt absolutely helpless and couldn’t imagine continuing my life this way.

Through lengthy research, my husband found Clear PasSage Therapies (CPT) and, within a week, I flew to Florida. I had no strength, and I was scared, but it didn’t matter. I had hope and faith that I was going to be well. When the therapists examined me, they noticed that my initial bowel symptoms started after I had several bladder infections following an early appendectomy and (more recent) C-section surgeries. When they felt my pelvis and abdomen, they immediately found extensive adhesions in these areas. They told me that some of the adhesions at my surgical sites felt three inches thick.

They slowly began peeling these adhesions apart, layer by layer. Though it felt uncomfortable and painful at times, I was happy to notice positive results, almost immediately. In the end, my adhesions were so extensive that I stayed at CPT for two weeks. At four hours a day, that was a very intense schedule, but I could feel the changes in my body. I felt that they were saving my life. Over the course of therapy, I started to regain my strength. My belly went from feeling like an inflated ball of steel to feeling like soft skin again. A few days into therapy, I was finally able to have a bowel movement again – this time, without any pressure in my rectum. My body began to function better; my energy began to return.

I started eating solid foods again. In the weeks following therapy, I gained 12 pounds. It was incredible to eat something crunchy and fearlessly enjoy it. When I left CPT, I told them they saved my life, for I really believe they did. I remember the feeling of helplessness be fore I went to CPT, and I never want to relive that again. I don’t want to live thinking about death, or to deal with physicians who become abusive when they can’t provide answers. I was given a healthy body to use and feel great. That body was slowly taken from me because of adhesions, but I now have it back.

Clear Passage Physical Therapy has over two decades of experience treating the adhesions that cause obstructions, without surgery. Request a free phone consultation with an expert therapist to learn more about our treatment.